Evolution holds the key to reinventing the wheel

Two years ago I was charged with developing the best blast wheel ever made – we like to set the bar high at Wheelabrator! Now, as we launch the result of that project – COMET HD – I wanted to tell you a bit about how it was developed and why it really does live up to the accolade of ‘best blast wheel’.

The first temptation when faced with a challenge like this is to go back to the drawing board and look purely at the theory of how to develop the best wheel. What do the maths and physics tell us about what would make the wheel perfect?

In his 2011 book, Adapt: Why Success Always Starts With Failure, Financial Times journalist Tim Harford called this temptation ‘the God complex’. In this scenario you find the most brilliant minds in engineering, maths and physics to calculate what the best blast wheel should look like.

The trouble is, this approach rarely achieves the right results in practice. Of course, the theory is important, but it can’t tell you everything about how a machine will behave. Equally, having brilliant people is important, but they also need to have the right attitude – they need to believe that sometimes you have to get things wrong in order to get them just right.

In other words, starting from scratch wasn’t the answer. We knew that our blast wheels were already the best performers in the field, so we wanted to build on that success by looking at what was working well and what we could improve.

The hidden inner world of the blast wheel

If you’re reading this, it’s likely you’ll already know how a blast wheel works, but to explain how we arrived at the best wheel yet, it’s worth recapping.

Abrasive enters a rotating impeller through a feed spout, where it then accelerates, travelling towards the inner wall of a control cage. It exits the cage via an opening and is picked up by a wheel blade, which it glides along before being thrown off the blade tip and onto the workpiece surface.

That’s the theory, but the starting point for improving this process was to get a deeper understanding of how it was working in practice. To do this, we used a super-high-speed camera to film the entire cross-section of various blast wheel configurations in operation, before reviewing the footage in slow motion.

We watched the footage again and again. With every viewing, different members of the team spotted something new – something we hadn’t known before about how the abrasive was behaving.

The evidence of the video footage showed us that things weren’t working as smoothly as theory would suggest. The movement of the abrasive through the wheel was not as controlled as we thought it was, causing unnecessary wear and high abrasive consumption.

Starting from the best

In order to address these issues, we needed to understand in more detail what the causes were, and to improve the wheel we needed to start out with the best existing one. Our starting point was to test, test and test again.

We took a broad range of existing blast wheel designs, with countless variations of settings and internal configurations. The main design variations are the number of blades, their width, length and shape, the overall diameter of the assembly, the length of the control cage opening and the relative position of the components to one another. Given these many variations, there were a myriad of options to test.

These many tests, which looked at abrasive flow rate, blast patterns and wear on different parts of the wheel helped us to zero in on the best configurations of known parameters. It also allowed us to see where the biggest improvements could be made – the impeller design, the control cage geometry, the shape of the blades and the positions of these parts in relation to each other could all be refined.

To develop COMET HD, we took an approach that mimics natural selection and evolution in nature – trial and error. For each of the elements that make up the wheel we produced a range of variations which we tested against one another. Once we found the best performing of those, we developed a set of variations from that and tested again. Slowly refining down to the best possible choice.

Take the wheel blades as an example of this process. The aim was to optimise the transition of the abrasive ejected from the control cage onto each blade, its movement along the blade surface, and its acceleration and velocity at throw-off point, all while minimising wear of the blades. 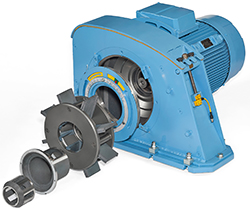 To improve the transition of the abrasive onto the blade we tried a curved design. While this did indeed make for a smoother transition, it also over accelerated the abrasive and caused excessive wear on the blades. So we adjusted the design, trying a semi-curved version which, through many rounds of refinement to get the perfect balance, became our final design.

This process with the wheel blades was repeated across every element of the wheel’s design. Looking not just at blast results and abrasive flow, but at ease of assembly and maintenance, reduction in wear of parts and many other parameters.

With COMET HD, a foundry using 100t of abrasive per year could save more than €23,000 annually and it can also reduce maintenance time by 30%. Not to mention it achieves the best blast results yet in a shorter blast time. By letting the test results guide us, we’ve arrived at a wheel which outperforms all others and delivers cost and time savings to customers into the bargain.

Find out more about our new COMET shotblast wheel and register for exclusive updates here.

1 Response to Evolution holds the key to reinventing the wheel